This issue does not occur after updating from any of these versions or later.

A design change in the NVIDIA HD Audio driver version 1.3.38.60 has resulted in the need for Windows to reestablish the audio endpoint. Consequently, Windows detects all NVIDIA audio devices (audio-capable monitors and receivers connected to the NVIDIA GPU) as new devices.

Because the Windows policy is to set a new audio device as the default endpoint, the default audio device might change from the previously used headphones or speakers to monitors connected to the NVIDIA GPU.

Users can switch back to a preferred default audio device by clicking the volume icon on the Windows taskbar and then selecting the preferred playback device.. 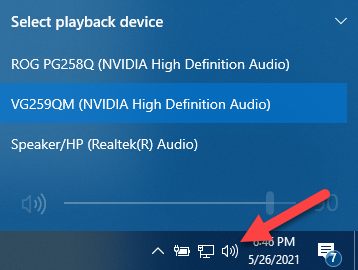 The new design only effect users upgrading from an older driver to 1.3.38.60 or later. Once the update is made, future updates will not require resetting the audio playback device.